So recently I went on vacation to Niagra Falls, on the Canadian side. I spent several days in one of the nicer hotels overlooking the famous Horseshoe falls.  During this recession, the hotels were doing their best to offer special perks, reduced rates or special room upgrade offers to attract tourists.  One of the perks was a daily free breakfast buffet. 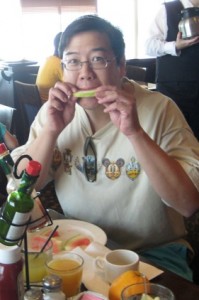 For much of my life I guess I grew up thinking “free, wow, whoopee great”  “free food, wow”. “free buffet … wooah better eat up and stock up and take advantage of the situation.”  I had driven up to Canada and so the first morning in my hotel room, I found myself feeling more like I just wanted to sleep in.  I mean it was well over a 7 hour drive and I was feeling kind of exhuasted and would rather sleep in the morning and eat maybe a late lunch.  But alas there was the free breakfast buffet that would end around 11 AM, and eating a late lunch wouldn’t be free.

And so like a dog helplessly unable to resist free food, I woke up and made my way to the hotel restaurant at about 10:50 AM, ten minutes shy of closing time.  And to my amazement the place was a packed madhouse as I guess hundreds of other guests had the same idea.  So maybe the analogy was more like hundreds of helpless sheep or cattle being herded into a breakfast buffet, unable to resist passing up their complementary breakfast buffet that came with their nice hotel room.

And this is where I got to see basic human nature come thru in the buffet mentality.  I got to see how a buffet may be a powerful illustration how we easily get caught up in a cycle of massive waste for the purpose of saving money.  We think we are missing out, we don’t want to pass up opportunity because it may never come up again and we’ll regret it or get criticized for it, so we’d rather seize, corner, hord and then in our own privacy throw away and waste opportunity then to risk taking just what we need.

I started off with the attitude that I was going to be healthy and not stuff myself.  I mean I’m in my mid 40s, I don’t excercise that much and so I don’t need to put on more pounds.  So I ended up grabbing probably a dozen pieces of bacon, some sausage, pancakes, muffin, various fruits, scrambled eggs and freshly cooked sunny side up eggs, containers of yogurt, some cereal, a few containers of milk, lots of french toast.  Needless to say I was way over stuffed. But as I looked around the hundreds of other free breakfast buffet diners I saw the same thing.  And so I did what any senseless human would do in a buffet I went back into the buffet serving area for additional servings, most determined to pick out that favorite piece of food that you can best manage to down when you’re already full.

Everyone had a server that brought out drinks to your table.  Our server suggested that we take some food back to our hotel room because they would just throw away the uneaten food.  Oh No!  But at the same time Oh Yes!  I mean Oh No because that instinctive part of me as a child and my parents telling me to not waste food comes thru.  And Oh Yes makes part of your mind think “buffet bonus rounds”   Now you can overstuff your self without limit.  So some people pocketed a few muffins or fruit back with them.  But then a few were less subtle and brought back trays, with plates, filled with food back with them.  So I took a substantial amount of food with me, smiling, feeling satisfied that I got my fill of breakfast buffet and had not left any opportunity go to waste.  The hotel room had  a tiny refridgerator that could store some persishable foods.

It wasn’t until the second and third days of getting the free breakfast buffets, that I could snap out of this buffet madness mentality and start appreciating the benefits of just eating what I need or even eating less than I need.  After the second day of bringing back unfinished food back to our hotel room, I realized that the prior days unfinished food was still mostly untouched.  On day one I had maybe 2 containers of yogurt in the fridge and on day two 4, and on day three now 5 so in this quest to hord and not miss out on opportunity my body just was unable to consume as much as my mind felt I deserved to be able to eat.  It’s like a little voice says: “hey you spent a lot of money for your hotel room and it includes a free breakfast buffet so eat up your money’s worth.”  But in this buffet madness situation I really appreciated how “having more becomes lesss”  Beyond a certain point eating more, no matter how much “free” it is only reduces my satisfaction and only starts to detract from my happiness.

By about the 4th day of my vacation and getting used to this breakfast buffet, I found myself calmer and just getting a breakfast I might normally get if I was just ordering food at a normal a la carte breakfast. Because I realized I am already privileged and I will continue to have plenty of opportunities to eat even after this buffet is over.  In fact I’m privileged enough to afford paying for food to the point that it will be very challenging to not become increasingly overweight.

But what I realized is that in some ways much of consumerism in America, be it food in a buffet, food in a super market, shopping for anything during sales, and discounts, or shopping in a wholesale clubs like Coscos, BJs, or Sam’s has a lot of the buffet mentality weaved in it.  I read that supermarkets on average make about 1% profit on the stuff they sell.  That’s because a lot of stuff goes bad and is thrown out.  But somehow, someway some economic geniuses figured out that it’s more profitable to lower the price of things to the bare minimum and make it up in huge volumes of sales.  The same geniuses realize that it’s better that you error on the side of overstocking and having waste than to run out off an item and miss out on a sales opportunity.  A lost sales opportunity is bad.  And waste is not so bad because you can have clearance sales or at least get tax right off.

So in the business of being the most successful and profitable business, although it doesn’t seem to quite make sense, somehow someway, it turns out that part of the formula to being successful is to run your business like a buffet.  Offer huge quantities at reduced prices, even at a profit loss if necessary and realize that substantial waste is part of running a successful business.  And we as consumers mostly love it, because we get deals deals deals and can buy our way into status more and more economically than ever.  But like a buffet maybe some of us at times pauses to look at the wasteland of discarded computers, cellphones, old TV sets, packaging, plastic bags, plastic silverware and of course lots of excess food.  Some of us reduce this waste a bit and keep it stored in our homes as pack rats,  some of us store the excess food in our bodies so we become overweight and then some of us just give up and just accept that’s it’s mature practice to go to a restaurant, order food, eat maybe half of your food and then throw the rest away.

So is this buffet thing a bad idea?