I miss being Ten 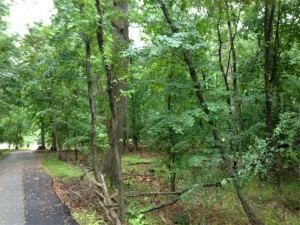 This morning I took my dog out for the usual walk just before getting ready to drive off to work.  The temperature was moderate, it had just stopped raining and was overcast.  It was a quiet Monday morning on the road next to a wooded area. And when I listened to the insects ringing I was suddenly taken back to when I was maybe ten years old.  And this wooded area was now an unexplored wonder filled with yet unknown wild life and wonders.  It was at that moment I wanted so badly to just cancel the day and the many days afterwards and just explore the woods.  Maybe I could survey the creek I knew was there. Maybe, I could build a stone bridge, look for fish, or consider my option for building a small hideout.

I have been reading the biography on Steve Jobs and am finding that despite the fact that he had a reputation for being very nasty and insensitive, he was something so precious to witness his humanity.   The part that had me in tears was when Steve recounts his 20th wedding anniversary writing a small note to his wife.  Steve reads the note to the author of the biography and starts crying uncontrollably.  The final quarter of the book was a witness to a very driven human surveying his life, his children, wife, close friends and close rivals.  Steve talks about his son, Reed, who physically looks like him when he was in his 20’s.  Steve is proud of his son who is showing the early signs of maybe becoming a future cancer researcher.  The final pages have him in a wheel chair reading a note to the board of directors announcing his resignation and essentially saying goodbye.  Some board members are in tears.  Then they all huddle around him to give him a fairwell hug.  I start to tear again as I visualized this scene.   Not long after Steve’s resignation Apple announced Steve Jobs had passed away from cancer.

I then hear about two more deaths of icons from my childhood.  Two singers from the 70’s disco era: Donna Summers and then Robin Gibb (died of cancer) passed away over the week.  And it’s wierd to witness the modern day draw that the Beatles still have, to see photos of them in their 20’s on album covers, and then to know that only one person: Paul McCartney is left.  Yet just last year I watched Paul perform live at the White House and he sounded just as vibrant and fresh as when he was some 40 – 50 years younger.

Then on the other end of the age spectrum, going from people passing away to people emerging, I hear that another emerging icon in the news, Mark Zuckerberg, founder of Facebook just got married.  He is in his twenties, emerging as an icon, much like the Beatles, Steve Jobs, Donna Summers, the Bee Gees, Michael Jackson and so many others who were placeholders of people I learned to admire or dream of emulating when I was some 20 or more odd years younger.  Only now I’m in my 40’s and I’m feeling too tired to admire him.  I’d be much more interested in anyone who was planning on exploring this “exotic” patch of wooded area next to my apartment.  Anyone interested in building a tree house, and forming an secret club — no grown ups allowed, OK?

So I feel like I’m at the cross roads of time, having a sense of how very short a lifetime is.  It almost seems that it’s not very long for a infant to grow up, mature, become independent, maybe have kids of his/her own, try to achieve dreams and then prepare for leaving this Earth.  More and more I can see the wonderful little boy and girl faces within larger shells of 50 to 70 year old adults.  And then I’m amazed when I see marvelous adult men in little boys faces, and the beautiful adult woman in the faces of little girls.

A mature adult at the end of his journey is still capable of dropping back into youthful immaturity.  A young child may awaken a inner wisdom that belies his age by many many years.  So in this strange cross road I would no longer be surprised to witness a precociouis 10 year old impart wisdom upon a struggling 60 year old adult. For somehow I can see more clearly how we are so much the same, in wisdom and knowing, regardless of our age.

I shift focus back to my electronic gadgets.  I hold my once highly prized iPhone.  It’s now so ubiquitous of a device that it’s passee.  I almost want to seek the next new thing, but it doesn’t seem like there is going to be one.  But even more, I’m really getting disillusioned and tired with cool electronic gadgets.  Thanks to the marvelous vision of Steve Jobs I have a device that allows me to quickly look up things on the internet anywhere and anytime. I can even talk to my iPhone and it will do the search for me.  It’s the kind of convenience and control so many modern life consumers, like myself, have always wanted.

But in my crossroads I think I’m tired of being consumer of ever more meaningless gadgets that have lost their thrill.  As I finish my walk with my dog next to the woods, I think about a future where I return to that wonder of building that hideout, that tree house, in that small patch of wooded area with many hidden wonders and unexperienced adventures.  I think I might want to return to being 10 years old, when I knew less things, and so felt less expectations and could simply day dream more.  I imagine tossing out my iPhone and all computers and being out of touch.  I imagine returning to the magic of living the uncertainty in simple things of little consequence when I was a 10 year old boy.