Poverty is when you want what you don’t have 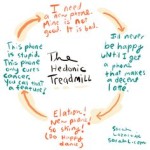 I remember about 15 years ago hearing a priest read a hand written speech previously given by Mother Teresa.  In that speech she described working with the “poorest of the poor” in Calcutta, India.  And during that time she came to find the meaning of poverty.  She started to describe the most impoverished people being very wealthy and isolated.  She was once quoted as describing the United States as the poorest country she has ever encountered.  One of the most materially rich countries in the world suffered most from the poverty of loneliness.

A few years ago I recall seeing some documentary on happiness and what seems to make people happy and what doesn’t.  It certainly addressed the areas of how money correlates with ones happiness.  The message is there is not much correlation between the two, and in fact it seems you actually start to get less happy with more money.  One point in the documentary that seemed to crystalize why more money could make one less happy is the image of many of us pushing hard on an endless consumerism treadmill, constantly wanting more, the new thing, the next thing. And when we get what we want we move on to the next thing we want.  And I visualize myself like a helpless consumerism rat striving for the next thing that will make me in some way look or feel better. Some key things that seemed to be linked to greater happiness were things like living in shared living quarters with many other people, sharing chores and eating together, somewhat like a large family.  Another thing mentioned was that activities of volunteering or helping others factored in big to increasing ones happiness.

And  recently I discovered an unfinished a blog entry I somehow forgot to post 3 years ago.   It was like a message to myself that I was not quite ready to fully appreciate until now. That message was that poverty is when you want what you do not have.  For me wanting what I don’t have consists of feeling a tension and demand from my being.  It is a state of being hounded by vigilant thoughts of “oh no I’m late,”  “By now I should have done this,”  “I’m behind where I should be,”  “I’m so far behind,” “I wish I had this,” “I wish I had tried this,”  “I wish I had not chosen this,” and “If only I had more money”.  This state of being is poverty.  Poverty is a self-inflicted state of consciousness that one can choose to embrace or not choose to embrace.  That choice comes up every moment of life.  From this state of being one manifests poverty of the self.  You are unable to be fully with self because you in various ways feel “not enough.”  This poverty of self then creates the more tangible displays of loneliness, material poverty, greed, envy, and distress in the world.

Happiness comes when I can accept my current state of where I am and what I have.  There is not a wishing I were elsewhere, bigger, better, and stronger.  Instead there’s an acceptance, greatfulness, and embracing for where I am, who I am and what I have.  Because when that happens I also feel that I am enough.  And then when I can believe and feel in my body that I’m enough, that tension starts to go away.  I can start to surrender and feel ease.

The more I can remind myself that I am enough then there’s nothing to do.  I might survey the things I feel the itch to complain about … and I start to let go of those complaints … because mostly it’s rather exhausting and hurtful to hold on to them.  The urgency starts to drop.  If all I ever achieve in life is where I am right now … when I can savor who I’ve been and where I’ve come from, and the journey that I have traveled, with all it’s unique challenges — then I become successful because I am enough.

My definition of successful is when I can finally believe and feel that I am enough.  Furthermore when I can come to this state not so much as a result of achieving something but as a result of a choice to stop at where I am now … where I am at, wherever I am at, however I am at … despite how messy and imperfect my inner critic might believe.  When I can do this then I am successful.  When I can just stop running on the treadmill then I have successfully become me.  Each moment I can keep showing up in life as it comes, however it may come, I am successful once again and again and again … moment by moment.

This entry was posted in Uncategorized. Bookmark the permalink.