Facing the Inner Conflict with Violence in Entertainment 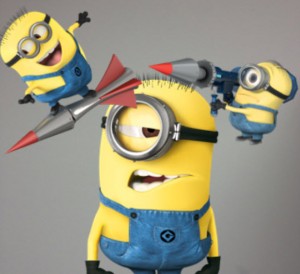 Since child hood I have been very big into watching movies.  I was a sucker for blockbuster action movies and still there is something about a movie that goes “KA-BOOM … POW ….  BAM!!!” that tickles the male part of me.  But lately I’m more conscious of a desire to avoid the block buster movies if I know or sense that it’s going to be violent.

Some say that such movies is like eating junk food.  But actually junk food doesn’t bother me.  Something else about violent movies bothers me.   It’s probably the trend I see with the need for movies to give that extra bit of punch or shock factor and “go over the top.”  It really bothers me when shocking violence is mixed with comedy (example: Inglorious Bastards).  So while I had mild curiosity when I heard about the movie Hangover 3, I felt a strong “NO” voice speak up inside me after I saw previews of decapitation of a pet giraffe being turned into shock humor. I don’t think I want to train myself into making that funny.

I have memories watching this very violent movie “The Town” back in 2010.  It centered around a group of bank robbers, but gave it a very gritty mix of bitter anger and brutality. The bitterness and violence felt quick shocking to me, but it turned out the audience was a bit on the wild and raunchy.  So their was laughter emerging in response to killing.  And that bothered me.

Dahleen Glanton from the Chicago Tribune posted an article about why people may laugh in serious movies.  She initially is disturbed that our society is just becoming insensitive to violence.  But finally Dahleen tries to leave us some assurance that people laughing at violence are just nervous reaction to something that is overwhelming.  Honestly back in when I was watching “The Town” my sense is that the audience was not expressing mere nervous reaction.  To me it really felt like an act of densitization at work.

I remember when I was in my early teens and I could definitely feel the need to act and look tough.  There was something cool and attractive about being a bit rebellious, and “bad”  In being popular with others having that element of “Bad” made you kind of the “in group” and being “Good” made you part of the “uncool-nerdie” group.  So in trying to be “in” you may decide not to get caught behaving scared or horrified by terrifying violence.  No instead show your toughness by laughing copiously in the face of terrifying violence, especially if it’s just a movie.  At first it sounds like harmless pretending.

But I believe that very act to pretend to be tough in a way actually does make our skin a bit thicker.  And somehow it seems much of society respects “tough skin”.   We akin toughness to being straight forward and honest.  And maybe sensitivity to being evasive and complicated.  I mean what could be a more straight forward conversation than:

It’s straight forward and believable.  And even if one of the persons doesn’t want to really kill the other they’re kind of locked into fear of life to consider having to kill the other.  And so if one “accidentally” kills the other, it’s kind of OK in a distorted way because in the literal show of words there was no lying.  In the aggressive conversation we have all put on our “thick skins” bracing ourselves to minimize feelings.  It’s like a statement I heard in one of the “God Father” movies when a hit man says to his victim just before he kills him … “Nothing personal … Just business”

person 1: I like you a lot.  I would never hurt anyone.

person 2: Oh I really like you too, and I would do anything for you.

That sounds like a one-to-one relationship conversation filled with vulnerability to making mistakes, disappointment, looking like a fool, possible betrayals, and having strong feelings.

Before I ramble too off the topic, my point is that I really believe there really is a kind of “evil” being fostered in this world and but it’s not the simple “good versus bad” kind of evil but rather the “numbing and desensitization” kind of evil. To have feelings, pleasant or unpleasant, is to L-I-V-E but to consistently numb feelings is to un L-I-V-E   It’s interesting to note that L-I-V-E spelled backwards is E-V-I-L.  Because once you start numbing you not only numb out discomfort, but start numbing out simple pleasures.  And so then you have to seek something more shocking so that you can start feeling.  You have “thicker skin” and so in order to feel you need an event to have a bit more amplified shock and drama factor.  And then once you feel the shock you will likely numb it out, even maybe laugh at it, so that possibly when violence (verbal or physical) hits closer to home you’ll be ready to handle it, with a mature thick skin.

I recall some years ago visiting a friend who came back from military duty in Iraq.  He was playing a military combat game with another friend who was on leave after he himself was wounded in Yemen.  It sort of blew my mind how so enthusiastic and intrigued two soldiers traumatized by real life violence seemed to be relaxing the hours away killing virtual people with guns on a their Xbox video game.  But you know most block buster video games are about killing (as of June 28th 2013 the #2, #3, #4, #6, #7, #8, #10, #12, #13, and #14 best selling games on the Xbox were military combat games)

It’s a bit more chilling when you think that modern military combat is now occurring with drone aircraft warfare.  Now military pilots can work a domestic kind of job, driving to an office in the morning, combating remotely with real humans on the other side of the world with drone aircraft controlled by video screen and joystick (actually probably something more advanced than a joystick), and returning home in the evening to enjoy dinner with the family.  A bit not too different then those two soldiers playing on their X box.

And I’ve heard many times the debate on whether violence in entertainment be it a video game or a movie can promote real life violence.  Many say the violence we see in our entertainment is only a reflection of our real world violence, that it’s really only a mechanism for us to stop living a fantasy “Cinderalla” world and toughen up to the realities of a tough world.  But I say even if I were to accept that the very idea that violent reality inspires violent entertainment and not the other way around I find the idea of “toughening up” disturbing.  Toughening makes us numb.  And then numbness promotes the acceptance of shock and even the need for shock just so that we can feel something thru thicker adult skins. So for me I have strong value in things that promote sensitivity, love, and even naivate.

So I’m now starting to look for source of entertainment that promotes emotional sensitivity and trying  to stay away from things that encourage numbing.  For me movies like “Up”, “Despicable Me” and “Les Miserable” are more up my ally.  And it’s not just in choice of movies but also choice of any video game (I like this game called “Sprinkle” on my iPhone) and TV shows (Sponge Bob, Duck Dynasty).

But I’m still conflicted with the male voice of toughness. A little part of me for some reason likes the machismo of something like the movie “Fast and Furious” with lots of “Zoom Zoom and Kaboom”.  But a lot of me sides with the lyrics to a song by Jewel: “Please be Gentle with me.  I’m sensitive and I’d like to stay that way” stick with me.